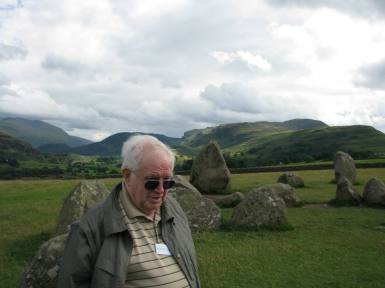 Chair and founder of the Wordsworth Conference Foundation

Richard Gravil, the Chair and founder of the Wordsworth Conference Foundation, died suddenly on a mountainside in Majorca last May.   Some years ago, when the Wordsworth Trust decided it could no longer afford to sponsor the Wordsworth Summer Conference, it was Richard, working together with Nick Roe, who formed the Conference Foundation, wrote its bylaws, and restructured the summer conference so that it could continue and be economically viable.  After a few years at the Forest Side in Grasmere, he was able to move the conference here to Rydal Hall.  So we are here this evening, in this place, because of his extraordinary efforts.

I met Richard at my first Wordsworth Conference, back in 1986, when we were based at the Red Lion Hotel in Grasmere.  It was my first summer in the UK, and I hadn’t had fish for breakfast since I was a little boy in Minnesota, so I was delighted to try smoked haddock the first morning, and the next day, I confidently ordered kippers.  Richard sat down across the table from me, and watched, with an ironic bemused smile, as I struggled with what had to be the boniest fish on the planet.  When his plate of kippers arrived, he took his knife and fork, said “This is how most of us do it,” and with two deft strokes, completely deboned his fish.

That’s how we met.  I could have kicked him.

But I didn’t, and as I came to appreciate his peculiar sense of humor, I also came to appreciate how deeply he loved these mountains and the poets who lived here.  In his teaching positions, Richard did not have the pressure to publish that most of us feel; so he was able to distill his thoughts and arguments over time, and when Wordsworth’s Bardic Vocation appeared, it had the solidity and depth of understanding that only comes from living with a poet for many years.  His last completed project, The Oxford Handbook of Wordsworth, which he co-edited with Daniel Robinson, is effectively a festschrift to our conference, since so many of us are its contributors, and that work has been justly praised as an “overwhelmingly wondrous experience.” Daniel is fond of saying that, on the handbook, he played Robin to Richard’s Batman, and was proud to do it.  But Richard was not just a Wordsworthian; he was also a pioneer in what we have come, under his influence, to call Transatlantic Romanticism.  Joel Pace remembers walking the fells with Richard in 1996, here at the conference, and discussing with him a vision of an organization and a new journal that would bridge the artificial divide between English and American literary studies.  That vision took bodily form, just a year later, as the Symbiosis conference and the Symbiosis journal, which Richard co-founded and co-edited with Phillip Gair.  Richard’s Romantic Dialogues, based largely on lectures and papers that he delivered at this conference, is still recognized as a seminal work in Transatlantic studies, and what used to be “an oddly neglected academic field” has now become mainstream.

But I think most of us will remember Richard, with his cap and his wooden stick, as the leader of our walks, whether the early-morning strolls up to Rydal Cave and the Upper Falls, or the vigorous Wainwrights that fill up our afternoons and make this conference like none other in the world.  Richard knew and loved every contour of these hills, their spectacular views, and their bogs and damps, and he shared that knowledge and love with each of us, year after year, until his body could no longer manage it.  I asked my son Nick, now a botanist with our National Park Service living in the mountains of California, to write a few words about walking with Richard—Nick attended this conference three times and in 2014 took Richard’s place as leader of our A walks.

In my life in the mountains I have known a great many people with a love of the outdoors, but none with as profound a sense of place as Richard Gravil. Richard's fell walks were far more than recreational; they were wanderings with old friends, alight with poems and stories. Richard spoke more through walking than through talking, preferring to show rather than tell us what the poetry of the Wordsworths was about.

I remember an alternative A-walk Richard led us on when the rain was too harsh to make summiting worthwhile. Despite the adverse conditions, Richard showed us how to enjoy the fells even in their dampness, and somehow this was the hike that stuck with me. I remember losing in the mud the rubber tip on the end of a hiking pole, and Richard taking the opportunity to introduce us to the word “ferrule.” Richard's was a language of fells and meres and gills, words which tie him uniquely to the Lake District more than any other place in the world. The lakes and fells will miss him as much as we do.

After writing these words, Nick climbed Red Cinder, the highest peak in the Caribou Wilderness in northern California.  There in the summiting box he left a note—for Richard Gravil. 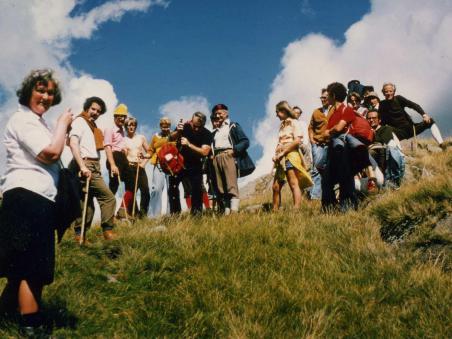 The photograph shows Mary on the left, aged 60 or 61, on the ascent to Stickle Tarn from Dungeon Ghyll, on the way to Grasmere, with Angus Easson, Molly Lefebure, Sylvia and Richard Wordsworth, Thomas McFarland, Horst Meller, Robert Langbaum and others.  After graduating from Lady Margaret Hall, Oxford in the 1930s, she taught at Summerhill with A.S.Neill, and other experimental schools, and qualified in Child Develoment at London's Institute of Education. She was a contributor to The Use of English, THES, and The Review of English Studies, and edited the Charles Lamb Bulletin from 1977 to 1988.

Mary's knowledge of Cumbrian topography and of course Wordsworthian connections, was on a par with William Knight's. A perennial friend of both the Summer Conference and the Winter School, from their invention onwards, she gave many a memorable winter school lecture, being an avid Wordsworthian with equal enthusiasm for Coleridge, the Lambs and Scott (she wrote on Scott's Old Mortality for Master Narratives the memorial volume for Bill Ruddick). Her very last service to the conference and winter school, having become too frail to attend, was the donation of a large number of books from her scholarly library to our fund-raising auctions. Her wonderful anecdotes live in the mind, not least her claim (surely unique in the annals of the conferece) to have kissed and been kissed by a young man called Dylan Thomas in 1940s Soho. 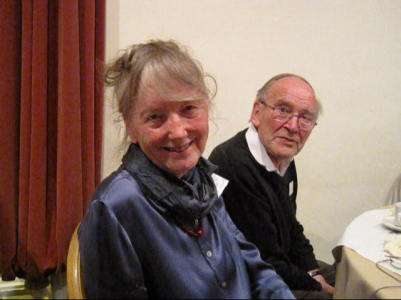 John Beer was a supporter of the Wordsworth Conference from its beginnings, as he was of the Coleridge Conference and of the Lamb Society. He was painfully shy yet warm, courteous yet of surpassing intelligence, modest about his profound scholarship, unaffected by his undoubted status as the leading British Coleridgean. John may have spoken at more Wordsworth Conferences between 1970 and 2010 than any other scholar, and he is pictured here with Pamela Woof on the 40th anniversary of the conference in 2010.

Having begun his career at the University of Manchester, John spent most of it as a Fellow of Peterhouse, Cambridge, and retired as Emeritus Professor of English literature. In addition to the Everyman edition of Coleridge's Poems, and Aids to Reflection in the Collected Coleridge, and innumerable magisterial essays John's critical achievement included Coleridge, the Visionary, 1959, The Achievement of E. M. Forster, 1962, Blake's Humanism, 1968 (all available from Humanities-Ebooks); Blake's Visionary Universe, 1969, Coleridge's Poetic Intelligence, 1977; Wordsworth and the Human Heart, 1978; Wordsworth in Time 1979; Questioning Romanticism, 1995; Providence and Love: Studies in Wordsworth, Channing, Myers, George Eliot and Ruskin, 1998; Post-Romantic Consciousness: Dickens to Plath, 2003; William Blake: a Literary Life, 2005; Romanticism, Revolution and Language, 2009. 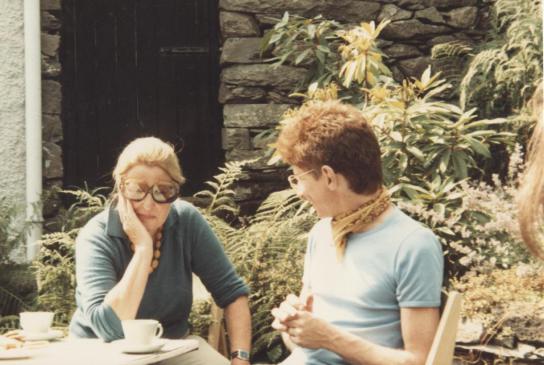 Molly Lefebure (1919-2013) was a wartime journalist, a novelist, a children's author, writer on the topography of Cumbria, biographer, and independent scholar. She was also a force of nature, a loyal and life-enhancing friend, and one of the defining personalities of Richard Wordsworth's Wordsworth Conference. She lectured brilliantly on innumerable topics, including the poetry of Humphry Davy, the work of Sara Coleridge (fille), and the murderous art of Burke and Hare. With her husband John Gerrish who died in November 2012, also at 93, she also presented the lake district through slides and classical music. Molly was responsible for the Conference tradition of fell-walking and cultural excursions, which she conducted with brio and expertise for three decades. She is shown here taking tea at Rydal Mount in 1982. Her contributions to literary studies include: Samuel Taylor Coleridge: a Bondage of Opium (1974), The Bondage of Love: a Life of Mrs Samuel Taylor Coleridge (1986), Thomas Hardy's World (1987) Private Lives of the Ancient Mariner: Coleridge and his Children (2013) 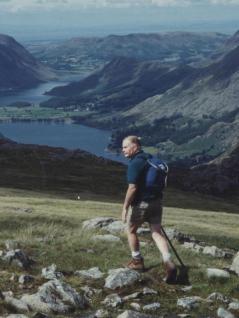 Thomas McFarland, who died in September 2011, aged 84, was both a great Coleridgeans and a great member of the Conference community. His Coleridge and the Pantheist Tradition (OUP, 1969) remains one of the indispensable works on Coleridge's thought; Romanticism and the Forms of Ruin: Wordsworth, Coleridge and Modalities of Fragmentation (Princeton University Press, 1992) contains seminal essays on Wordsworth and Coleridge.

Tom's most memorable lectures at the conference included vibrant instalments of his commentary on Coleridge's 'Logosophia', intended for The Collected Works of Samuel Taylor Coleridge, Volume 15: Opus Maximum (Princeton, 2002). He is pictured (opposite) above Buttermere and Crummock, striding towards Great Gable. 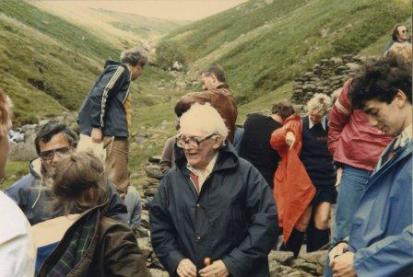 Michael Foot who died in March 2010, was a regular lecturer at the Wordsworth Summer Conference. A leader of the Labour Party, and a scholar of Swift, Hazlitt and Byron, he was always a popular and welcome friend. He is pictured here in the 1980s, after a reading of 'Michael' in Greenhead Ghyll (with him at the front of the picture are Robert Maniquis, Pamela Woof, and Duncan Wu).

His early morning walks around Grasmere were less tranquil than usual, being pursed by the media. And Michael's lectures were punctuated by periodic verbal jousts on Romantic Jacobinism, with Thomas McFarland, above. 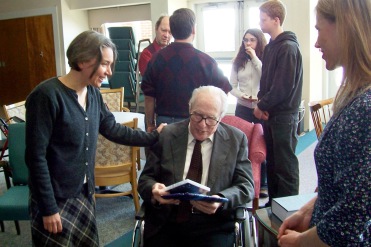 Stephen Parrish, Goldwin Smith Professor of English Emeritus at Cornell, and general Editor of the Cornell Wordsworth, died on Jan. 11 2012 aged 90. His appearances at the Summer Conference were all too rare, but were always enjoyed and always nurturing.

Parrish worked in naval intelligence in World War II and the Korean War. His excellent book, The Art of the Lyrical Ballads (1973), was one of the landmark books of that era, and helped to bring the lyrical Wordsworth back into critical currency after long periods of excessive focus on the blank verse philosophical poet.

His great memorial is the Cornell Wordsworth edition which he managed in a fashion appreciated by all who worked with him on that monumental task. He is shown at right with Sally Bushell (editor of the final volume of the series) at the party celebrating the completion of that great project. 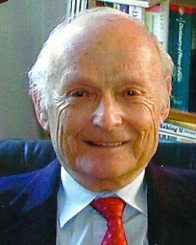 Norman Fruman, who died on 19 April 2012 at the age of 88 was a vivid presence at numerous Wordsworth Conferences, a good friend, a great correspondent, and of course, a controversial figure.

His brilliant 1971 book Coleridge : A Damaged Archangel, which put the entire Coleridge establishment on the defensive for many years, was puckishly described by Christopher Ricks as 'an explosive gift to all Coleridgeans'.Norman also wrote on Wordsworth and on Salinger and (with great knowledge and enthusiasm) on contemporary poetry.

An engaging obituary notice by Steve Balch can be found on the website of the Association of Literary Scholars and another has been published by the New York Times. The photo at the left shows the charm and vivacity we all knew and relished; he is shown below in conversation with a laid-back Richard Wordsworth. 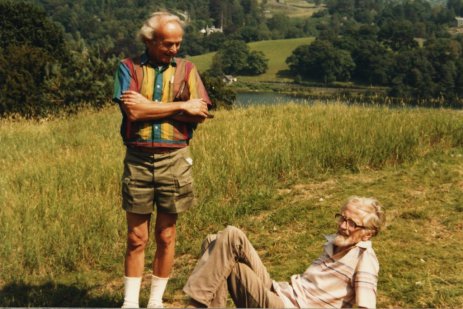